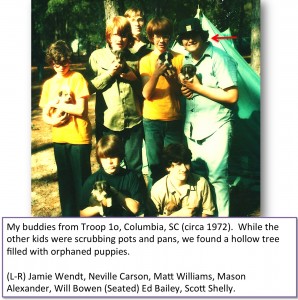 When I was a Boy Scout we would go on monthly camping trips. On every campout we would complain about having to clean the pots, pans and dishes after eating. We took turns doing the work but on every trip our disdain for dishwashing was always a center of attention.

I was elected the patrol leader and at the first meeting I said, “we all hate washing pots and pans, right? is there a way that we can get around doing it?”

Someone suggested that we take only prepared food. At that time SpaghettiOs,  canned soup and other processed foods for becoming very popular. We decided to take only foods that we could cook and that didn’t require cleanup.

For example, we would open a can of chili and then use pliers to hold the can as we nestled it into hot coals to heat up. Afterwards, we simply through the can away (this was before recycling).  If we wanted a snack we would make JiffyPop or smores.

Friday afternoon, when all the boys showed up to get the equipment for the camping trip, my patrol announced we were not going to take any pot, pans or other heavy cooking equipment.  When the scoutmaster, a stern old guy who always had a pipe clinched and his teeth, heard that we were not going to be cooking on the campout, he flipped!

He said that we had to cook food in pots and pans and clean up. “It’s part of the experience!” He spat.

I said, “Well, it’s a part of the experience that we all hate.” He gave me a arrogant glare as I swallowed hard from fear.

“Fine! Go hungry all weekend–it’ll teach you boys a lesson,” he said turning away and giving his attention to a more obedient group of boys.

Here’s the kicker: The senior patrol leader, and nearly ALL of the fathers who volunteered to come on the trip came over and ate with us! They were fed up with eating undercooked hamburger prepared in poorly washed metal pans.

We were the hit of the campout! And while all the other boys in the seven other patrols were washing pots and pans, we were playing, hiking, or just lying around reading comic books. We even found a tree with a hollow bottom and inside were orphaned puppies!

Spotting a spark and deciding to stop it before it became a wildfire, the scoutmaster put his foot down. It seemed that power was going to, once again, override ingenuity. He called the parents of all the boys in the troop – – 80+ kids, and said that we MUST all cook the same foods and any variations would be approved by him: scrambled eggs and bacon for breakfast, hotdogs and beans for lunch, and hamburger meat cooked with veggies for dinner.

The point of the story is, while everyone else was complaining about washing dishes we did something about it! We thought outside of the box. We chose to not be focused on the problem but instead to be focused on a solution!  And we all got a free puppy in the process!  (Although most of our mom’s made us take them to shelter.)

How about you? Are you complaining about what is, currently, or are you working to create new solutions?

It all starts when somebody says, “Okay, I get that this isn’t going the way we want it to go, but griping about it isn’t going to make it better. The  question is, ‘What DO we want?'”

Anyone can point out a problem. It takes someone with vision to look for a solution.

You are a person of vision! Stop focusing on the problem by complaining about it and start looking for ways to create the ideal situation.