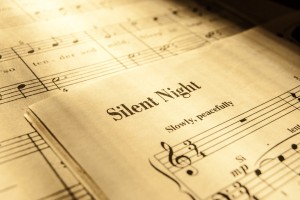 A man puts distance between himself and his problems and, in the process creates the greatest Christmas Carol of all time.

It may have been mice gnawing on the pipes. Or it may have been rust. Whatever damaged the organ at St. Nicholas Church in Oberndorf, Austria; the instrument would not be repaired by Christmas Eve service.

It was December 23, 1818 and Joseph Moor, the minister of St. Nicholas, was walking home having just attended a dramatization of the Nativity by a band of roving performers.  The performance had ramped up the town’s holiday spirit.  Everyone was in a festive mood—everyone, that is to say, except Rev. Moor.

He trudged home, his eyes downcast.  The gas streetlights reflected shimmering gold on the hard-packed snow.  His body shuddered from the cold and he pulled his scarf up over his mouth.

The following day was Christmas Eve. The entire town would converge upon his tiny church with the expectation of exalting the birth of Jesus Christ through singing.  Unfortunately, there would be no singing because the church’s organ was out of commission.

Moor slowly shook his head from side to side as he walked.  The annual Christmas Eve service at St. Nicholas was always the high point of the year in Oberndorf.  It elevated the spirits of the faithful and generated much-needed offerings to help the poor during the long winter months.

As Moor neared the corner where he would turn left to go home, he felt guided to, instead, take a right.  He walked unhurriedly outside the lights of the town and meandered up a tall neighboring hill.

His mind ruminated over the predicament in which he found himself.  How could he provide a touching and powerful Christmas Eve worship service with no organ?

He crested the hill that rose above Oberndorf, removed his scarf and peered into the vast night sky.  He thought for a moment about the star that had lead those first followers to find Jesus in the manger.  He gazed into the heavens looking for just such a guiding star or any divine sign as to what he might do.

He drew in a deep breath and closed his eyes to pray.  He thanked God for the birth and life of Jesus and he surrendered the outcome of the Christmas Eve service to hands more powerful than his own.

He drew in a deep breath and exhaled a long “Amen.”  The breath from this word froze into a small cloud before him.  He opened his eyes just in time to see it whisked away by a soft breeze.

From his vantage point high above the town, Moor now saw the homes and businesses all laden with snow.  The moonlight caused the snow to look artificial—like meringue on a pie.  He could see the wafting of streetlamps as well as the twinkling dance of colored Christmas tree candles.

He stared for several minutes at the unchanging scene.

It’s so quiet. He thought.  No, more than that—it’s absolutely silent and so peaceful.

Taking one long last look, Moor turned to walk back to town.  He thought of a poem about the birth of Jesus he’d written a couple of years previous.  His mind began to weave the evening’s distant and magical view of his town into thoughts of another enchanted night eighteen hundred years prior in Bethlehem.

Moor walked and the crunch, crunch, crunch of his feet in the snow gave a tempo to his speech as he recited his poem from memory.  Here and there he added a line or two inspired by the scene he’d just witnessed.

“This is a song.”  He stated aloud realizing what was forming in his mind.  “A song we can sing at Christmas Eve service tomorrow night. “   Then, he stopped mid-step as he once again remembered that the church organ was broken.

I don’t care. He said resolutely.  We’re going to do this.

The following morning, Moor beat on the door of church organist Franz Gruber.

“I didn’t expect to see you until tonight.”  Gruber remarked as he hastily pulled his suspenders onto this shoulders and invited Moor into his small, tidy home.

“We’ve work to do.” Replied Moor ungloving his hands and rubbing them enthusiastically above Gruber’s stove.

“Sir, need I remind you that the church organ is not functional.  There is no work that I can do.”  Gruber said.

“There is much that we can do—together.”  Moor said reaching his now warm hands into his breast pocket to fetch his notes.

The two men sat as Moor read the poem over and over while Gruber sought out a melody that would be simple enough to be played on the only working instrument he had—his guitar.

That evening, while the town packed St. Nicholas, Gruber and Moor sang Silent Night for the very first time—accompanied by a guitar.

Two weeks later, a world famous organ builder repaired the organ at St. Nicholas and when he completed his work he invited Gruber to assess his work.  Gruber sat behind the keyboard and played Silent Night on an organ for the first time.

The song moved the repairman deeply and he took copies of the music and lyrics to Kefling, Austria where he shared it with two groups of popular singers of the day.   They spread the song around Europe and in 1863, forty-five years after the song was first written, it was introduced to the United States—sung in German.

Since that time, Silent Night has become one of the most popular Christmas carols of all time.

As I think of the story of Rev. Joseph Moor steeped in a very big problem over what to do about the organ, I marvel at his course of action.

In that same situation, some people would complain to everyone about how unjust it was that the organ was broken in an attempt to excuse them from being responsible for creating a powerful Christmas Service.

Others in similar circumstance might actually go back to the church and, without tools or expertise, try and fix the organ—possibly damaging it worse in the process.

Rev. Moor didn’t gripe about his predicament nor did he try and force his way through it.  He simply chose to separate himself from his difficulty by taking a walk.  He went off alone and gave his problem over to God.  When he did, he saw from his vantage point that his town seemed more beautiful than ever before.

When we step away from something, we get a very different perspective and often the view we get is a much more peaceful one.  If we are in the middle of a challenge or an argument, simply stepping away for a while can give us the opportunity to see things from a higher level.

As Moor looked at the town, he didn’t see all of the discord, challenges and struggles that were going on with the townsfolk—challenges that he, as the minister, would have probably been well aware.  Instead, he saw a beautiful Christmas scene that opened his heart and made him feel more connected to God.

It’s been said that “time heals all wounds” and this is true because time gives us the one thing we most need to put our problems into perspective—distance.    So often, we keep challenges active and ongoing simply because we think about them so much.  In the process we stir them up and keep them active.

The last time I went scuba diving we surfaced after a thirty-minute dive to discover a storm raging.  Rain was pouring and the wind was creating some sizeable waves.  However, we had been 70 feet away from the squall and saw only the beauty of the ocean.

When we step away from what is troubling us and, more importantly,  when we follow Moor’s example and turn it over to hands more powerful and capable than our own, we experience the heavenly peace of a silent night.

So, what problem are you facing that might better be solved by taking a step away to gain a new perspetive?